The Original Colors of Pride

The meaning behind the colors on the homepage. 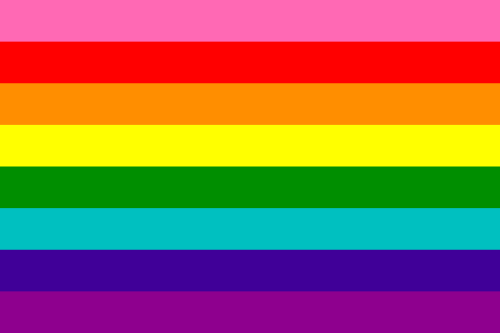 First designed by San Francisco artist Gilbert Baker in 1978, the Rainbow Flag was made in response to calls by local gay rights activists for a community symbol. With the help of 13 volunteers, Baker sewed and dyed the very first flag himself and assigned each of its original eight colors a specific message intended to represent various components of the LGBT community.

More than 40 years since its creation, the flag, only introduced as a symbol of gay pride about 10 years after the riots, has become a staple at LGBTQ events. That’s especially true of activism rallies and Pride parades, though it’s also come to signal that an establishment is LGBTQ-friendly.

Because the flag shares a similar prominence and endurance as the Christopher Street riots, “After Stonewall” used the original flag colors to guide the structure of our package. Each story has been assigned a color based on its meaning and the issues our reporting covers. To see our methodology for color and story pairing, please read below.

Pink (Sex/Sexuality) Dating apps and HIV are playing a huge role in the LGBTQ community’s culture of sex and sexuality.

Red  (Life) Nightlife gave birth to the modern LGBTQ rights movement, and has been at the heart and soul of LGBTQ culture for even longer.

Orange (Healing) While conservative religious beliefs have been a regular source of pain and trauma for many LGBTQ Americans,  for some that complicated relationship has also been a way for LGBTQ people to relieve their pain.

Yellow (Sun) Not only do many athletes live under the sun but in the last several years, many have come out and are casting a light on LGBTQ issues in sports.

Green (Nature) Not only is money and economics at the heart many LGBTQ issues and a lack of access to services, but the commercialization of Pride goes against the very nature and intent of the event.

Turquoise (Art) Comics are a medium that combines multiple art forms, and much about LGBTQ history has been told, captured and revealed through visual narratives.

Indigo (Harmony) Music has a long history as both a point of representation and expression for LGBTQ people, with many pointing to musical experiences as a way of connecting to and accepting their identities.

Violet  (Spirit) While U.S. military action and uses of force have always been a controversial issue for the LGBTQ community, access to the military is an important aspect of public life. Military participation is also often attributed to the core values of the American identity and spirit.