The Right To Serve

Recent reversals in federal policy threaten decades of gains made by LGBT members of the U.S. Armed Forces 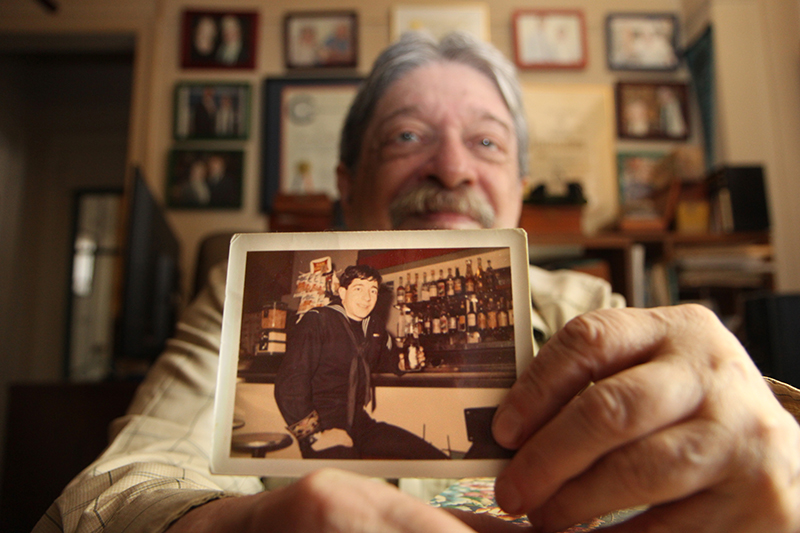 Army Reserve First Sergeant Denny Meyer holds up a photo of himself as a new enlistee on leave in New York. Photo by Jeff Arak

For 10 years, Denny Meyer kept a secret from the U.S. military. His superiors didn’t know, the other sailors on the aircraft carrier where he served didn’t know and subsequently, his fellow soldiers in the Army Reserve didn’t know. Meyer kept the secret because in 1968 being a gay service member could be a death sentence.

“In the Navy, you’d be grabbed in the night and thrown overboard,” said Meyer. “You’d be lucky if they killed you first.”

Now the vice president for the northeast region of American Veterans for Equal Rights, Meyer is one of the many Americans who served in the U.S. armed services in silence rather than risk expulsion or worse based on their sexuality or gender.

A year after Meyer enlisted, a group of gay, lesbian and trans patrons at the Stonewall Inn actively resisted a police raid that was a common occurrence in New York gay bars at the time.

Their actions led to days of protests and played a pivotal role in the formation of the U.S. gay civil rights movement. Reforms in the military regarding LGBTQ service members followed Stonewall, influenced by public opinion and political will. While thousands of transgender soldiers have been able to come out and serve openly in the last decade, recent reversals in policy now threaten that progress and raise a new issue: the right to serve.

“It mirrors what we asked of service members in the ’80s and ’90s,” said Carl Charles, a staff attorney at the law firm Lambda Legal, about the recent federal policy change barring transgender service members from serving as their identified gender.

“We asked people to make the ultimate sacrifice but to not bring their full selves to work. It’s a disservice to what we purport to stand for as a country,” Charles said.

In his 1990 book, “Coming Out Under Fire,” historian Allan Bérubé wrote that the unprecedented military mobilization of WWII contributed to the destigmatizing and “coming out” of gay men and women in the U.S., as it brought them out of their hometowns and into contact with one another.

“Gathered together in military camps, they often came to terms with their sexual desires, fell in love, made friends with other gay people and began to name and talk about who they were,” Bérubé wrote.

Despite the long intimate history that the LGBTQ community shares with the military, the government’s policy was clear as early as 1959. In a Department of Defense memo about administrative discharges, “homosexual tendencies” is listed as a cause for discharge in the “unsuitability” category right after bedwetting and alcoholism. 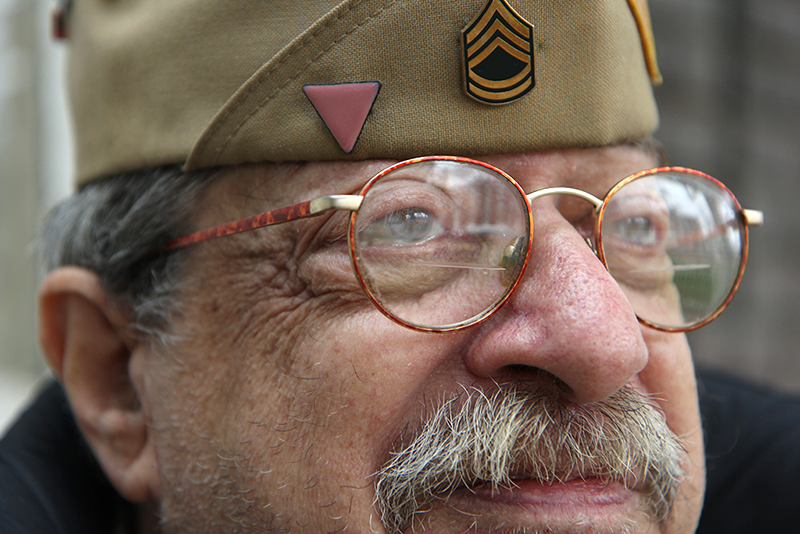 Denny Meyer, the public affairs officer for AVER, proudly wears a pink triangle next to his Army Reserve pin. After being used to label gay prisoners in concentration camps, the pink triangle was reclaimed by the LGBTQ community to stand for positive self-identification. Photo by Jeff Arak.

During that same period, Meyer’s mother and father fled Nazi Germany to America, instilling in Meyer a lifelong patriotism for the country that accepted his parents as refugees.

“When I was a toddler, my mother taught me that there was nothing more precious than American freedom,” Meyer said.

However, over the 10 years that Meyer wore the uniform, he found it more and more challenging to serve in silence. “Witch hunts” for homosexuals, crude jokes and “an anachronistic ideology of bigotry” made the environment feel toxic.

Finally, in 1978, he left the Army Reserve as a senior officer — but not because his patriotism had waned. “It was more because I simply could not bear being dishonest any longer,” Meyer said.

“We have a lot of people whose PTSD came from just hiding,” said Cole, who helps vets who were kicked out of the military for being gay to upgrade their benefits post-discharge.

In 1993, President Bill Clinton signed into law a Department of Defense directive — colloquially known as “don’t ask, don’t tell” — which removed the question of “sexual orientation” from enlistment applications.

Clinton’s solution to the heated debate in the ’90s about gays in the military was to not talk about it.

“He thought he was doing us this big favor. But if you came out, they kicked you out!” said Jason Bauman, curator of a Stonewall retrospective exhibition called “Love and Resistance,” at the New York Public Library. Bauman and other critics considered the law a step backward for the LGBTQ community.

President Barack Obama overturned the policy in 2010 and six years later made the groundbreaking decision to allow transgender troops to serve openly. Factoring largely into the decision was a report by the RAND Corporation, which assessed the potential impact of 6,630 active and openly serving transgender troops.

Despite RAND’s 2016 finding that transgender service members posed no significant threat to troop readiness and cohesion, and no significant cost to the military, Donald Trump’s administration enacted a ban on anyone serving in a gender different from their “biological sex.”

A Department of Defense spokesperson insisted in a statement that the policy is “NOT a ban of transgender individuals” because individuals still may serve, albeit as their gender assigned at birth.

For Bauman, the question of whether gays, lesbians and trans people should be allowed to serve on their terms is not only an issue of equality but one with much bigger implications. “Over and over again it’s about the right to employment,” Bauman said. “If the federal government can discriminate against us, the stage is set for others to discriminate against us.”

In February, the Military Personnel Subcommittee of the Armed Services Committee held a hearing in which five transgender service members echoed this argument.

“There should be absolutely no adjustment of standards — no different standards for trans people than anyone else in the military. All we are asking for is the opportunity to meet and be held to those exact same standards,” said Army Capt. Jennifer Peace. 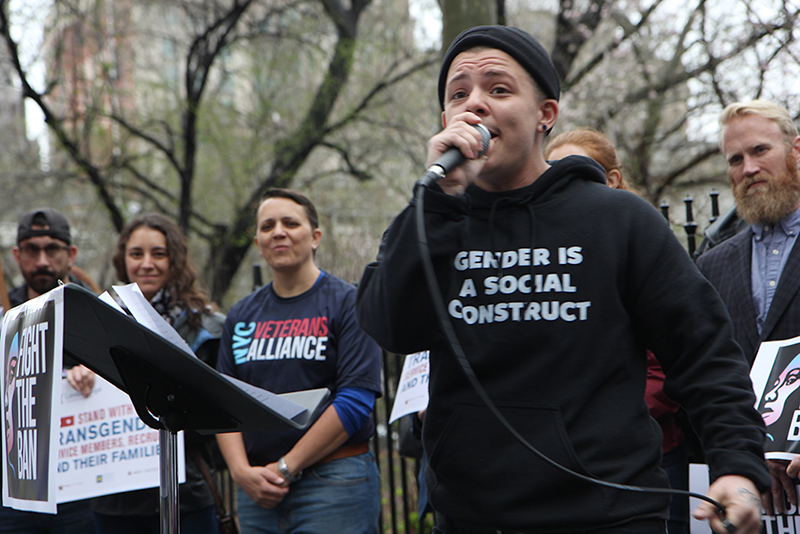 Camdon Ador served in the Navy until his contract ended in June 2017, one month before President Trump tweeted that transgender troops would no longer be permitted to serve “in any capacity in the U.S. Military.”

Ador participated in a protest outside City Hall Park in New York on April 13, a day after Trump’s transgender military policy officially went into effect.

“I’m not even sure what my opinions are on war,” Ador said. “But I am sure that I don’t believe that anybody should be stopped from doing a job that they are more than capable of doing based on their gender or sexual identity,” he continued.

“If we let this one thing slide, then what else starts to slide?”